When I tried to power on my TV this afternoon, pressing the power button did nothing, it felt like the switch inside was not being activated. I decided to void my warranty and take a look inside.

My TV is a Toshiba Regza model number 32XV555D, but I imagine the same switch is used on many Toshiba models and the following instructions may be of use to you too.

Opening your TV is dangerous and will void your warranty - there are high voltages inside and the following steps should only be carried out if you are sure you know what you are doing. I'm not a professional TV engineer and I take no responsibility for any damage you do to yourself or your TV if you are foolhardy enough to follow my description!

The first step to repairing the switch is to remove the back of the TV.
Unplug the TV from the wall, and remove any HDMI/SCART/Aerial cables. Put the TV screen side down on a soft non-scratch surface.

The back of the TV is held on by 17 screws - you will need a phillips head screwdriver to remove them.
The screws are not all the same size, so ensure you remember which screw goes in which hole. The screws to remove are all marked with an arrow, the 17th one took me a while to find - it is located above 2nd SCART connector.
Once the screws are removed, carefully lift off the back panel - it should come off easily. If not, make sure you have removed all the screws. 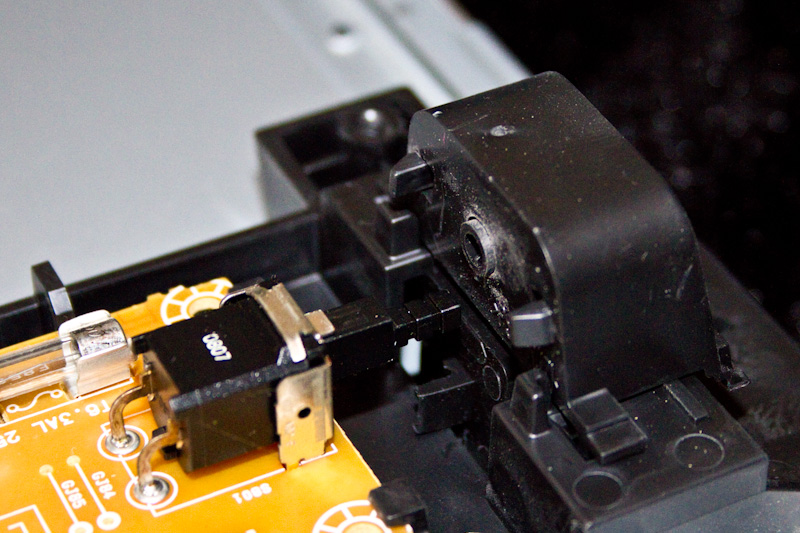 The power switch is at the right side of the TV , you will see that the button you push has a cylinder on the back which needs to somehow activate the switch which does not line up with it. The button should push a square plastic plate which should be attached to the switch. In my case, the plate had broken and fallen off the switch. This meant that the button did nothing. You can see in the photograph that the plate has fallen off and is lying underneath the button.

You have a couple of options at this point; you can either activate the switch manually, put the TV back together again and just use the wall switch to power your TV off an on, or you can repair the switch. From a search of the Internet, it seems that this is a common problem with Toshiba TVs - if your TV is still in warranty, it is probably best to get an official spare fitted, but I decided to make a stronger repair so it does not happen again. 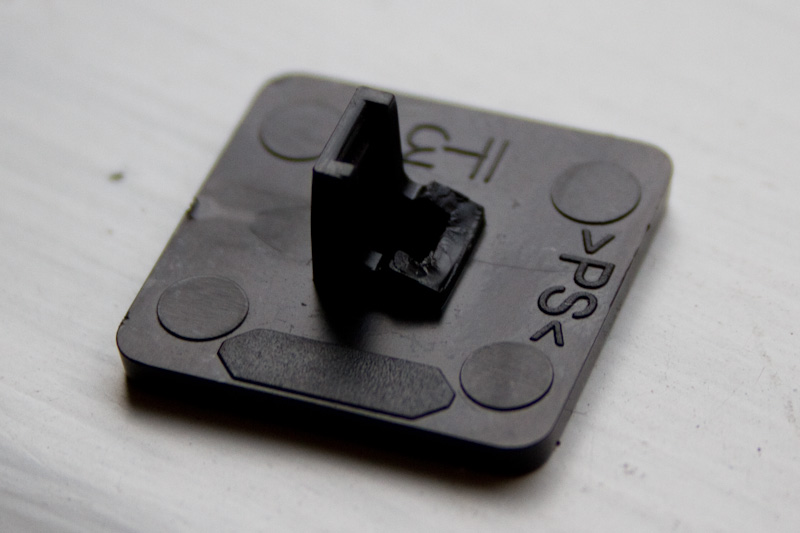 The plastic clip which holds the plate in place seems to be very fragile, and I could not find the small piece of plastic which had broken off. I mixed up some 5-minute epoxy and waited a couple of minutes for it to thicken up a bit. I put a small blob of epoxy onto the clip and put it in place on the switch. You will find this easier if you manually press the switch to put it in the 'on' position as this gives a little more space for maneuvering.
The plate should be able to stay in position by itself while the epoxy cures (why not go and write a how to fix your TV blog post while you're waiting!)
Once the epoxy has cured (mine says it is ready to handle in 15 minutes and achieves full strength in 1 hour) you can put the back on the TV by replacing all the screws. Power on your TV and, with a bit of luck, the power switch will work again.

You have probably missed the programme you were wanting to watch though! I hope this helps you if you have the same problem - the whole thing took me about 20 minutes to fix - much faster than waiting for the repair man!

Leave a comment if it worked for you. Thanks. 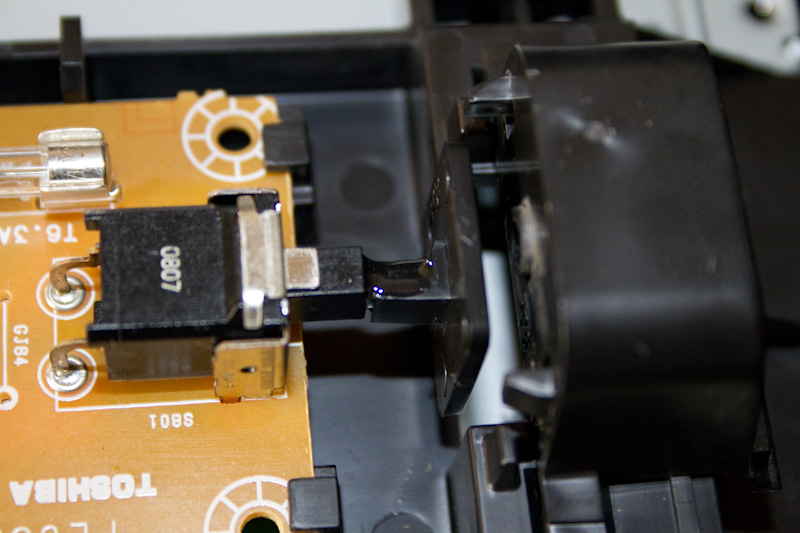