My diet 6 months in

I’m now about 6 months into my diet and fitness challenge and I’m continuing to make good progress!

On the fitness side, things are better too. When I started the diet, I could only run for 2 or 3 minutes on the treadmill before my calves would tighten and I had to stop (although I could use the elliptical trainer for 20-30 minutes with a bit of effort).

I started the Couch to 5k program near the end of September 2012 and managed to work through it without any serious injuries, finishing my last session on 26th December. At that time I was running about 5.8km in the 30 minute session. As an incentive, I signed up for the Bupa Great Winter Run which was held in Holyrood park on 5th January. I completed the 5k in 25:14, although I had a PR of 24:24 during training on a flatter course. I raised £650 for Chest, Heart and Stroke Scotland at the same time.

I’ve also signed up for the Edinburgh Spartan Sprint which happens in September, it’s a 5k with obstacles and should be a fun challenge! 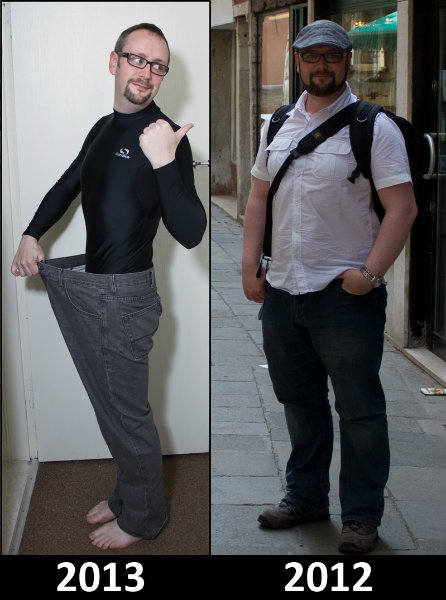 Graham Neale: Andy Love the blog, well done losing the flab. You are like an incentivising star shining bright in the darkness. (Not sure about your security passwords tho')
Andy: Thanks Graham. The passwords post is a work in progress and I'll admit I'm not using that system myself. I have KeePass in Dropbox which allows me to have nice long passwords for all my accounts. I'd ideally like to have an algorithmic solution, but it is just too complicated to generate a secure enough password that way :-( Thanks again for the comments!